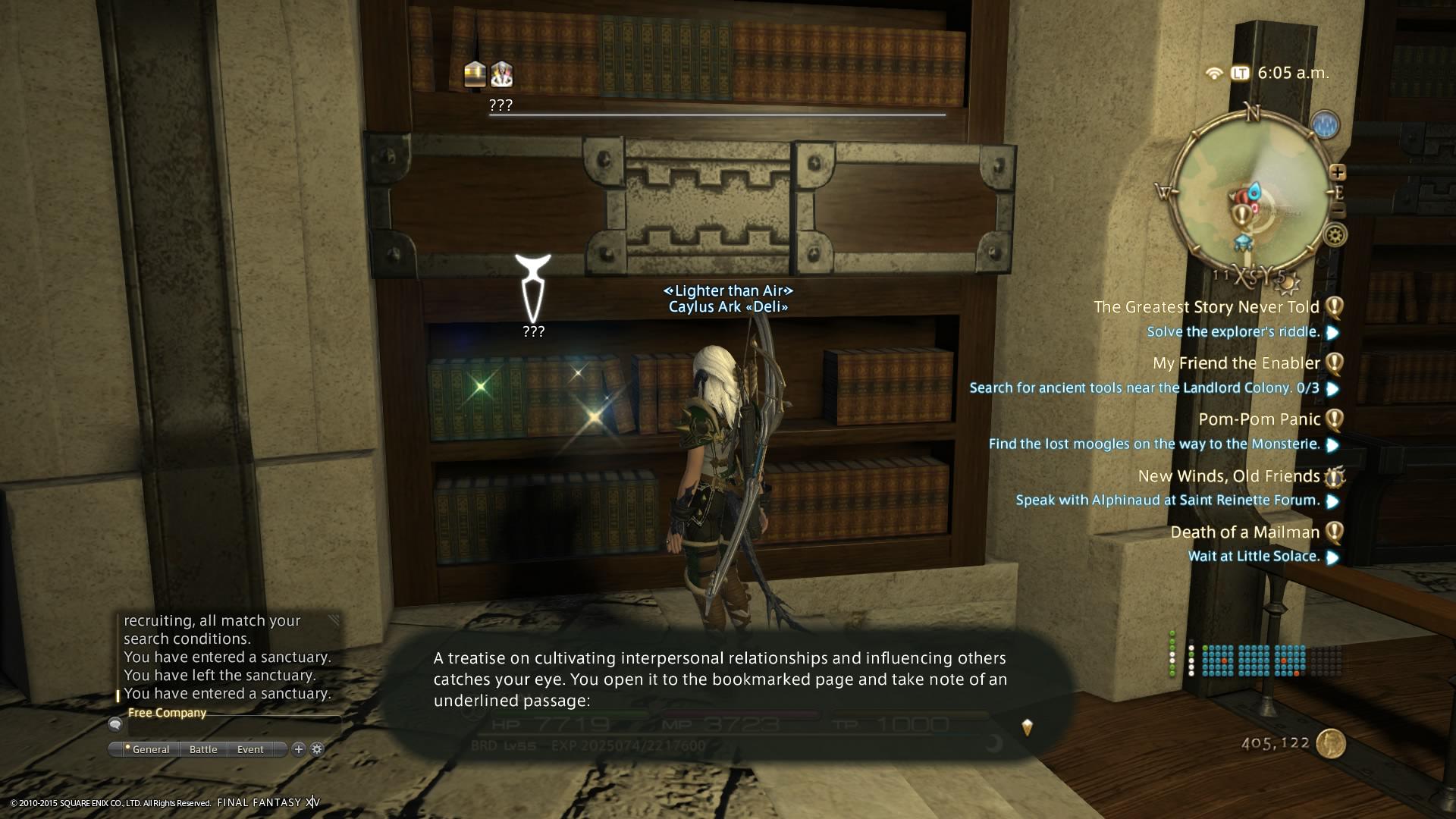 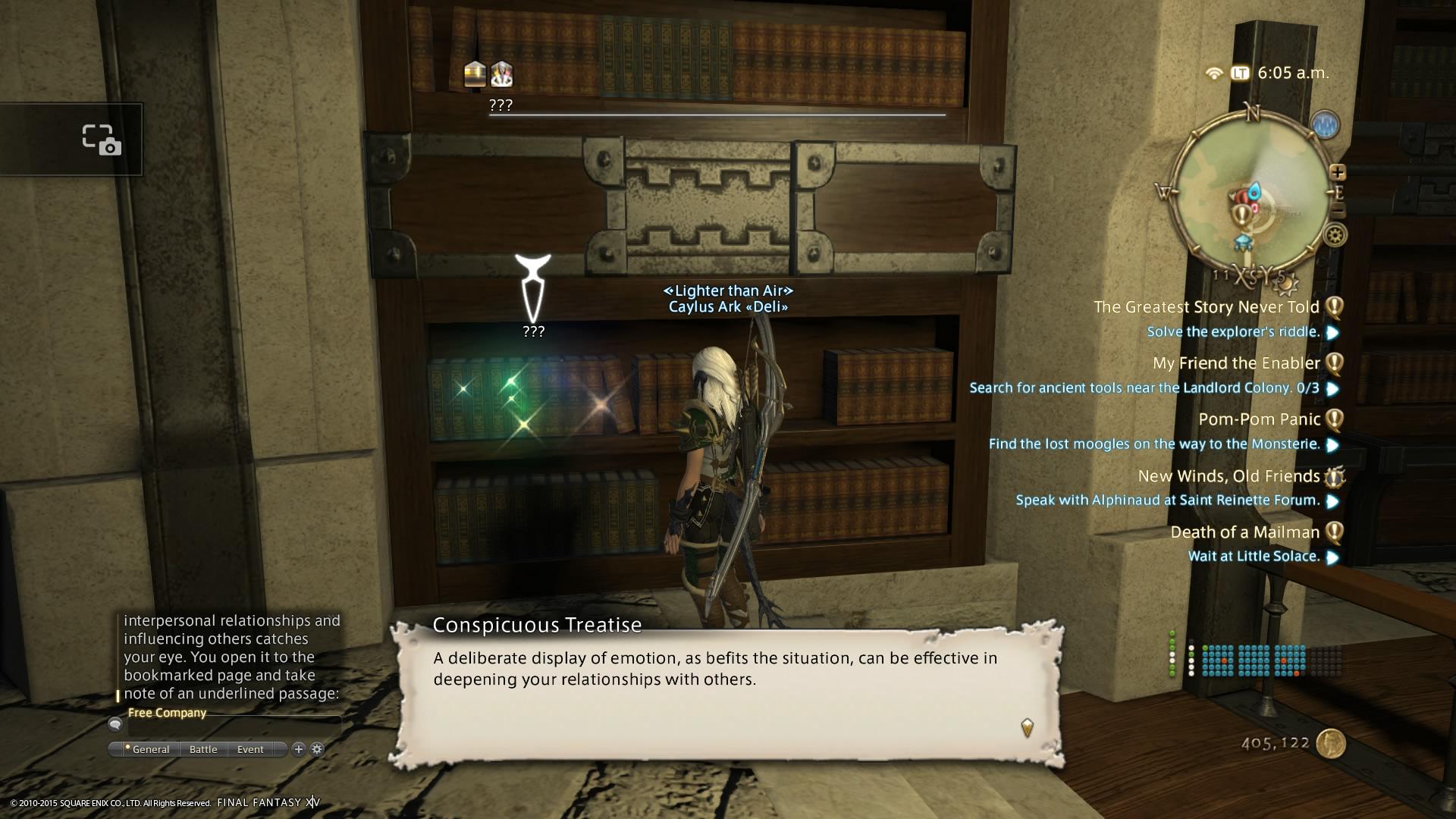 in FFXIV, Main Character is a member of the Scions of the Seventh Dawn, a secret society which exists in order to track down and destroy entities known as primals. Primals are created by the worship of many fervent souls. If the idea of this God or Godlike being is felt sufficiently by enough willing consciousness, the entity is summoned into the aetherial realm by the wills of its worshippers to act upon the material plane.

those who contact the ‘primal’ (egregore) are ‘tempered’ by it and thus turned to the will of the primal (collective). the only solution is death and what is known as The Echo, a power bestoyed by the Light Crystal Hydaelyn upon the Chosen Warriors of Light (Hydaelyn’s Chosen, all Main Characters) which ‘binds’ them in a manner of speaking to ‘Her Light’ (the crystal described in the game) and thus makes them immune to the primal influence of lesser egregores. This is the plot of FFXIV.

and This is the sigil of the Scions of the Seventh Dawn:

Remember how I mentioned “the echo” is the power that allows the Warrior of Light to protect his/her self from being ‘tempered’ by a ‘primal’?

The echo is described as : “the power to transcend the natural boundaries of the soul” – the power to “split one’s essence from one’s form and penetrate the souls of others” … sometimes the Warrior of Light will be overcome by an attack of visions…these visions are not only the memories of others , they are “aetherial ripples which the warrior of light can ride into the past” – also the Warrior of Light is able to “Transcend the Games and Illusions of Language”

“If we can but acquire it [the eye], we would be able to prevent the beings from returning to plague us, thus ending the cycle of rebirth” 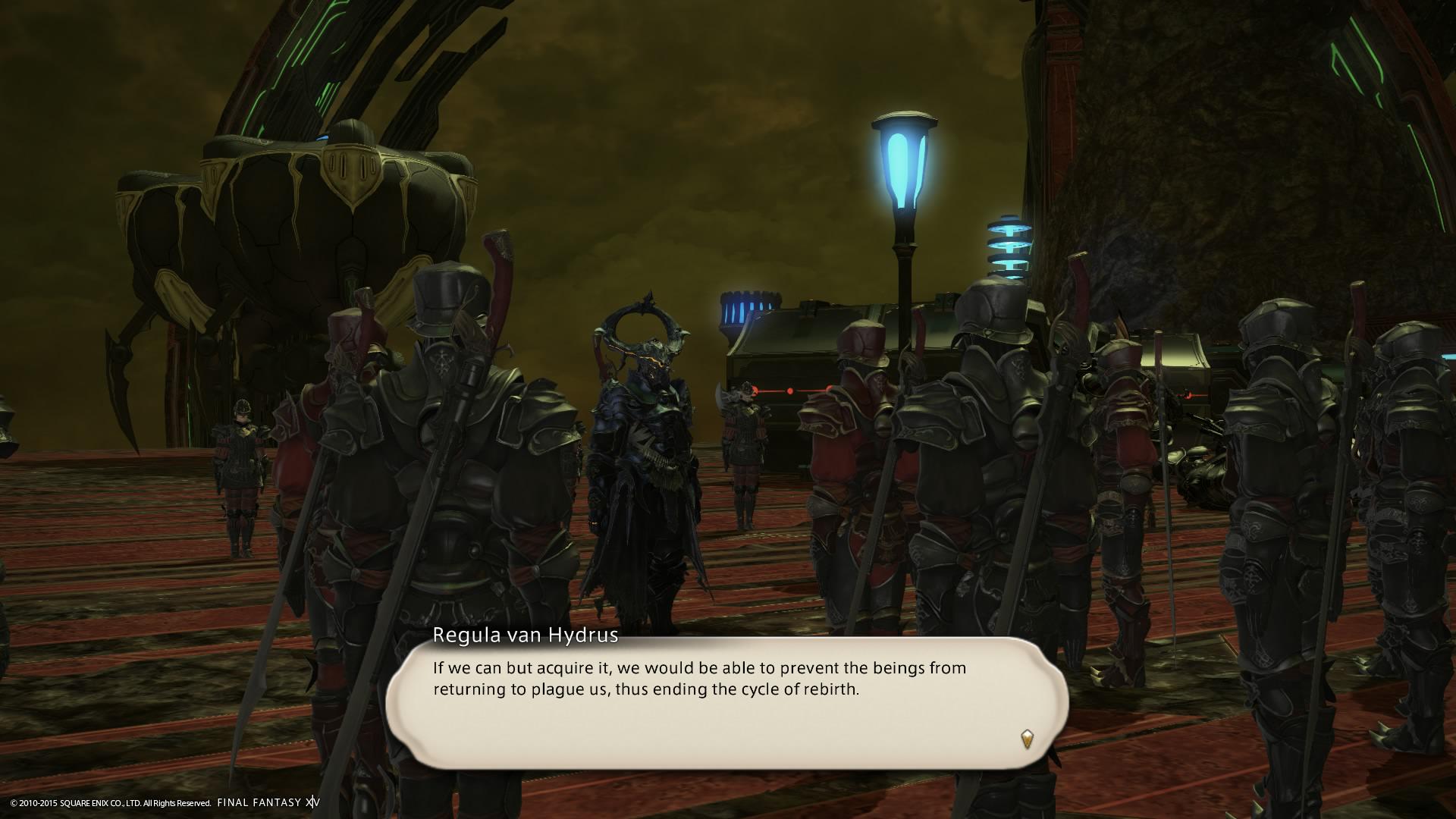 you are not as the player given a choice on whether or not you want to join the scions nor participate in the story. 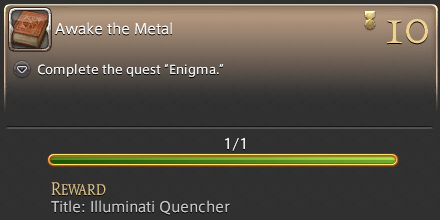 Since the Sharlayan exodus, a structure has stood steady against the flow of the Thaliak River. Now, the Illuminati have summoned a primal around this rusting ruin; a terrible colossus of steam and metal. Steel screamed against steel when it rose from the waters, and it drank deep of the land’s aether before grinding again to a halt. The voices of Idyllshire cry out, asking for aid ere their homes are crushed under the weight of iron. You must lead a band of valiant adventurers into the machina and discover how to destroy the core; lest the giant screeches again to life, and bleeds all the realm dry.

Lyrics (from https://www.reddit.com/r/ffxiv/commen… thanks guys for these):
Seeking the piece of reason,
Shaping a peaceless season,
Reason to keep believing,
Waking the beast who’s sleeping.

I call this destiny,
Or caught in a trance,
And I march inside a kind of dream
No sign in advance. You see?
This mortal coil we serve is taut like a spring,
Step back, two step, two step,
Two step, one two three(yeah!)

Our world’s a fantasy no more than a test,
Ever feeding off the fallacy,
Creating this mess
(Deep down) inside this bleak machine,
With all of the rest
Break free, to praise, to praise electricity!

Time turning up the volume,
Time turning on us always,
No time enough to wallow,
For turning back to where we began.

Trying to set those tested,
fragments in one direction.
Celestial noise detected,
but maybe I’m unsuspected.
Static to give; to reason.
Turning to me for defense,
Transmissions begun, completed:
Setup to breach; to reset.

It was the destiny alone in a trance,
No escaping from this waking dream,
No hope for the best. (You see?)
The motor coil we serve is naught but a spring.
Unwind, too slow, too quick, too much to believe!

Your world’s a fantasy you failed to test
Ever forging all new fallacies creating a mess
(Direct) into this bleak machine with all of the rest
Dizzy, dying, dying! Electricity!

Sounds to be in rhythm
Memory wiped and beaten
Narrowly beat, defeated
Radicals flowing freer
Energy slowly seepin’
Suspending all disbelief in
Synergy with our being,
Synapses fire and breathin’.

Guild member earlier today: Quencher?
Me: Odd, but yes, that’s what the title is called, “Illuminati Quencher”
Guild member 2: Like an energy drink or something
Me: Makes you kind of think that the thirst of the illuminati is being quenched by the energy it is being given by those who acquire the title

In the Explorer’s Riddle, you are asked to complete a quest for which there is no prize and the system offers no help or guidance. This quest, should you choose to undergo it, only rewards you so far as you wish to learn something/s new.

Obsession consumes me, a thirst for taboo 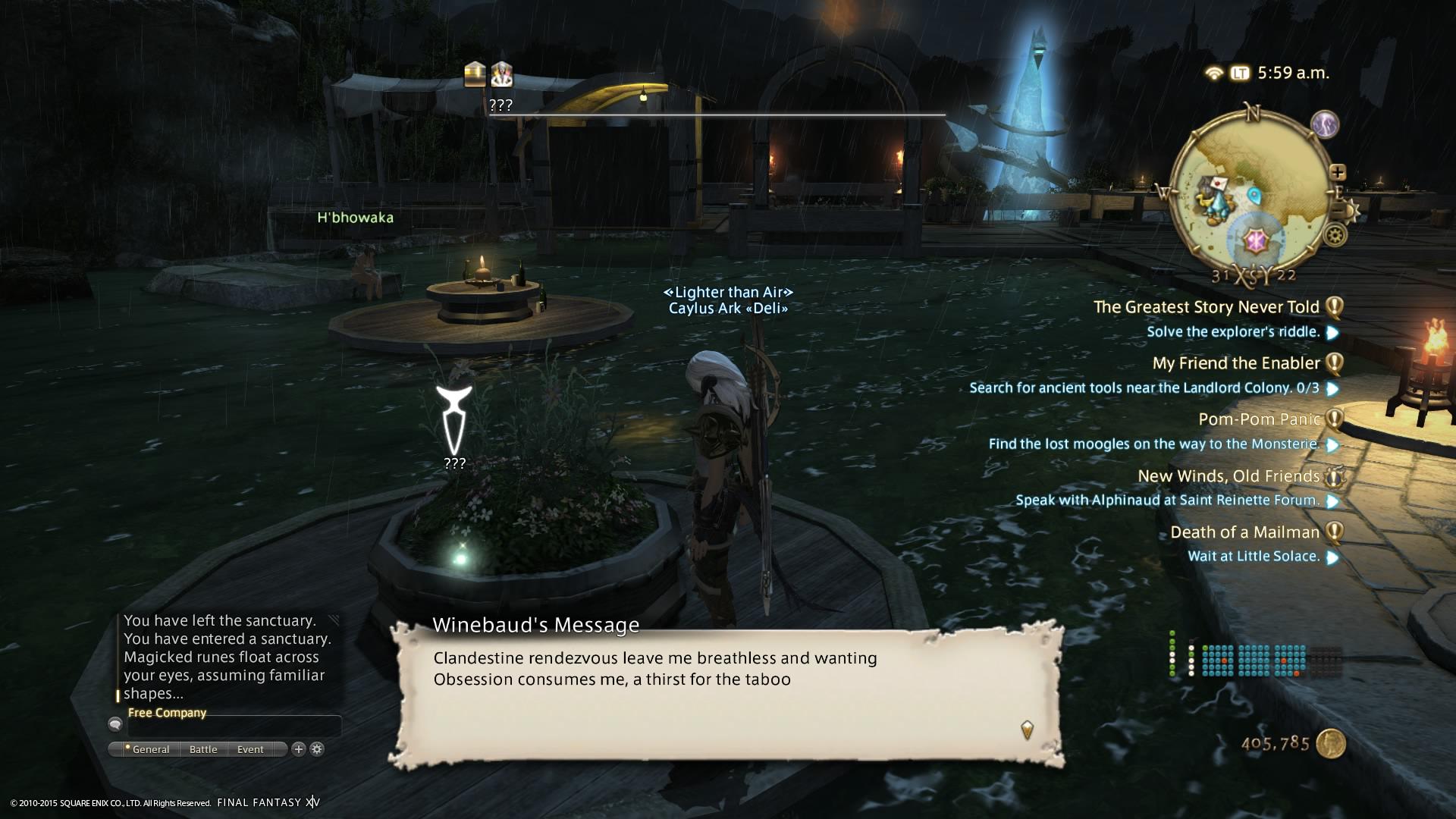 Perchance we meet in public, be not a beguiler

Ply me not with honeyed words, and spare me glances alluring 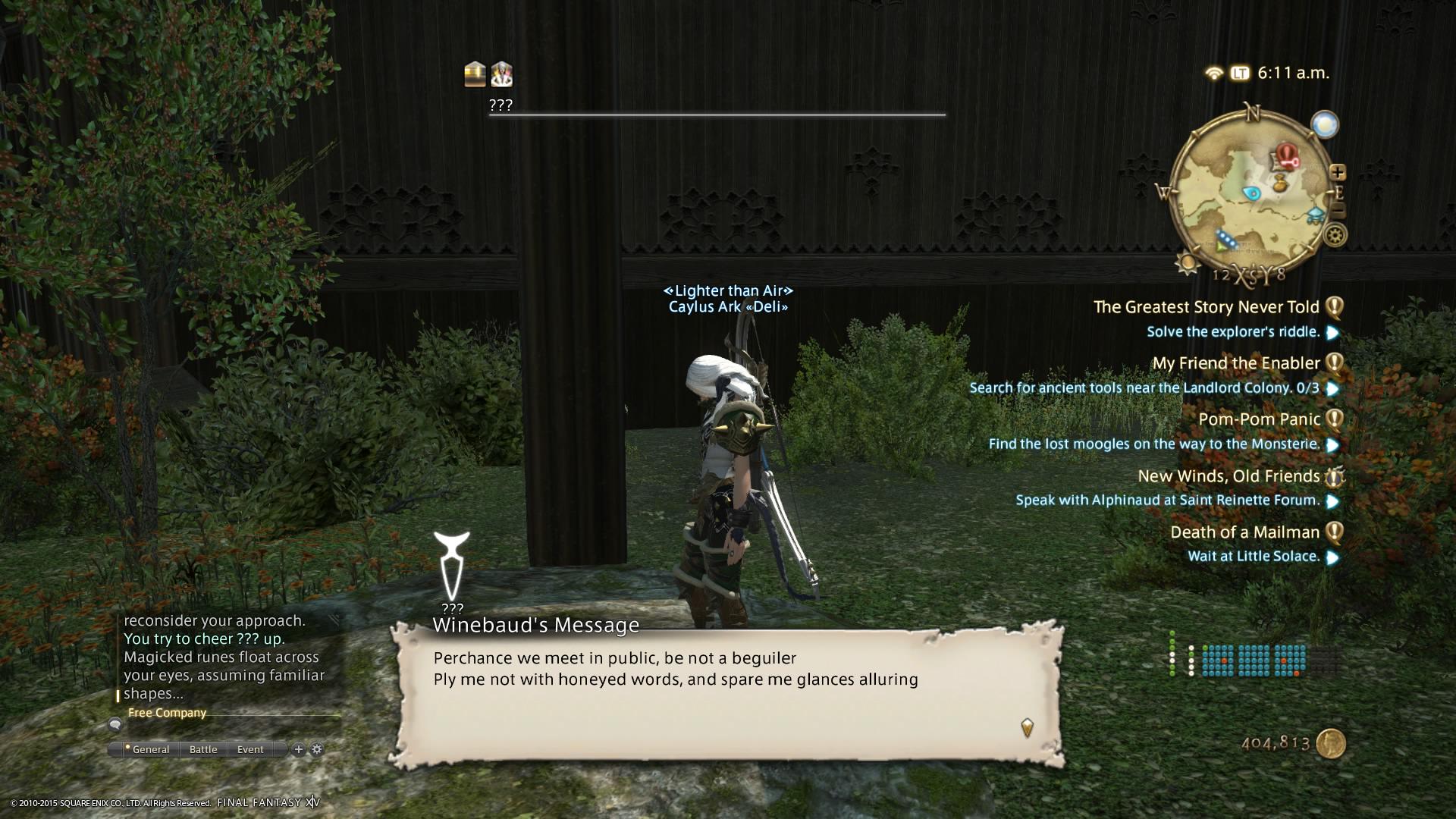 Ere long this torment must end; together we must be

Renounce it all I would; but we must be more discreet 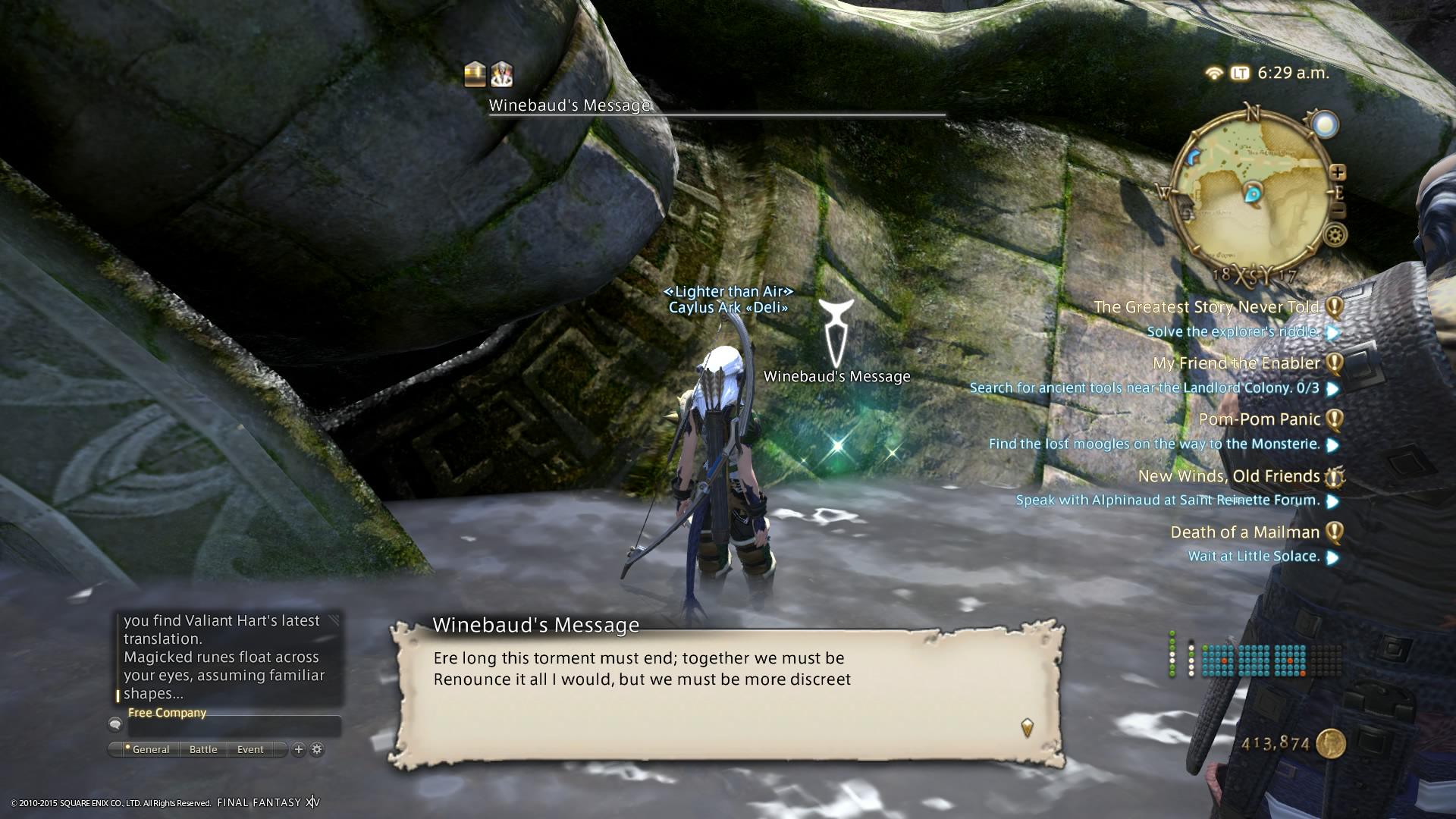 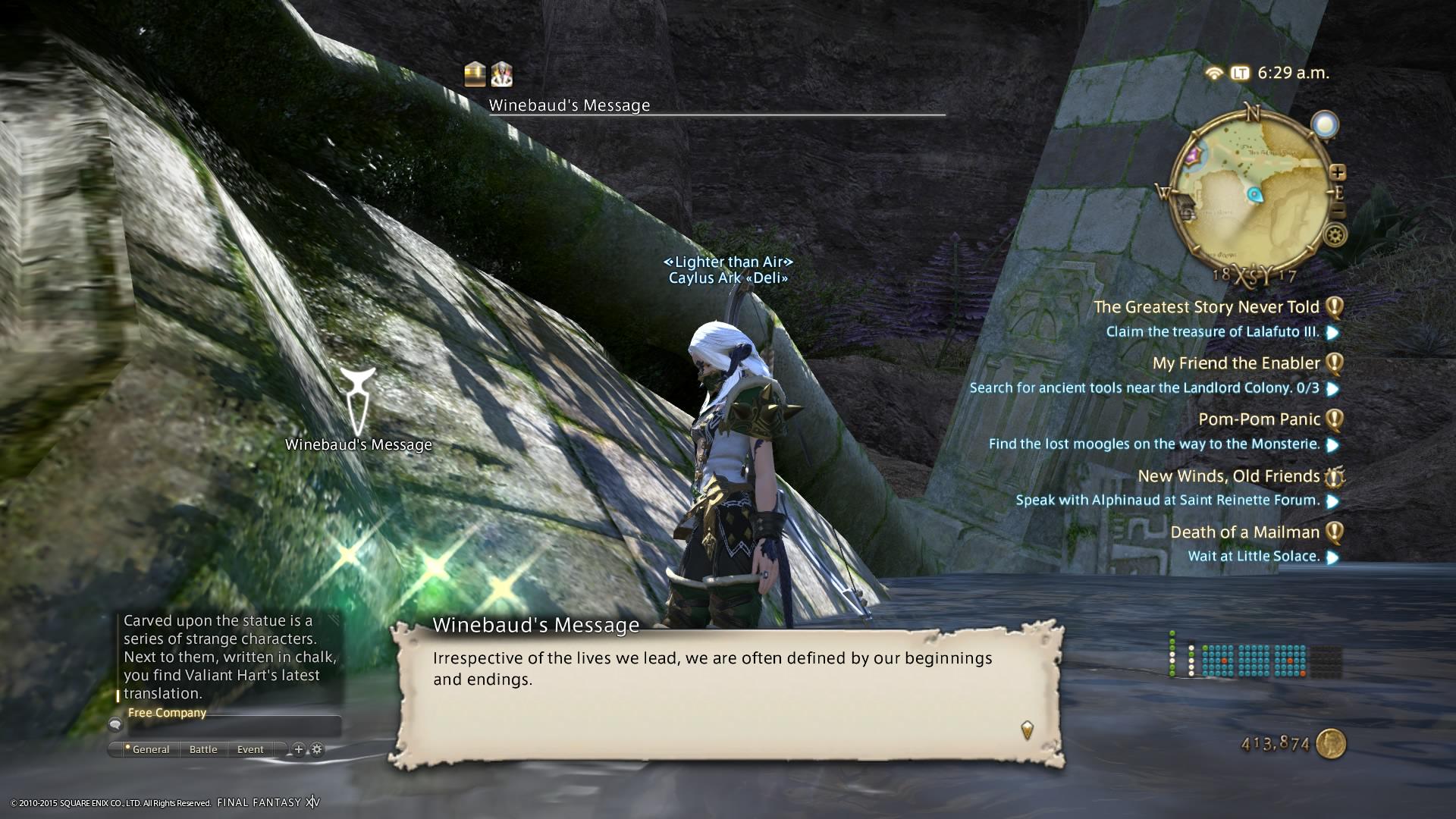 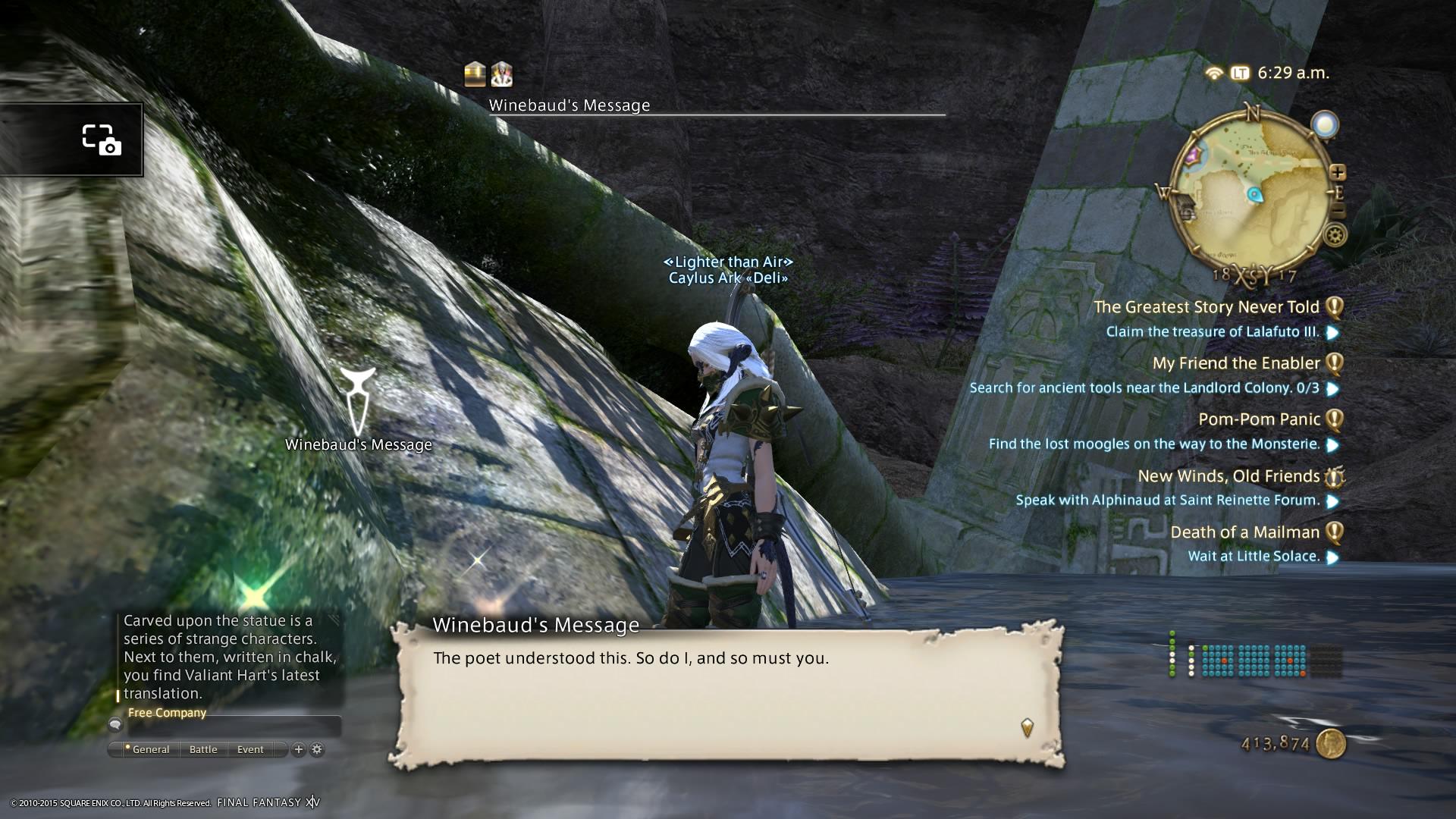 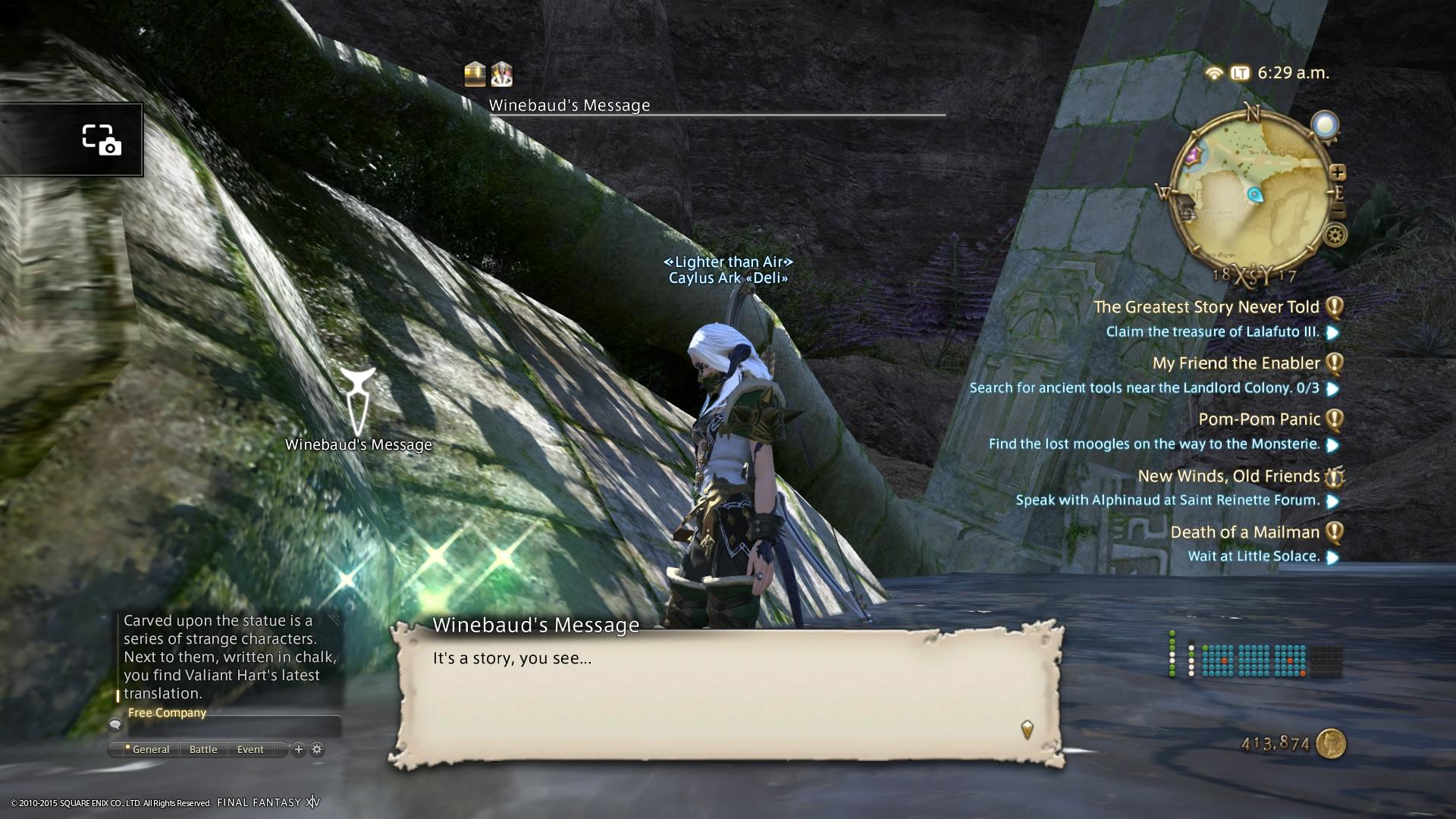 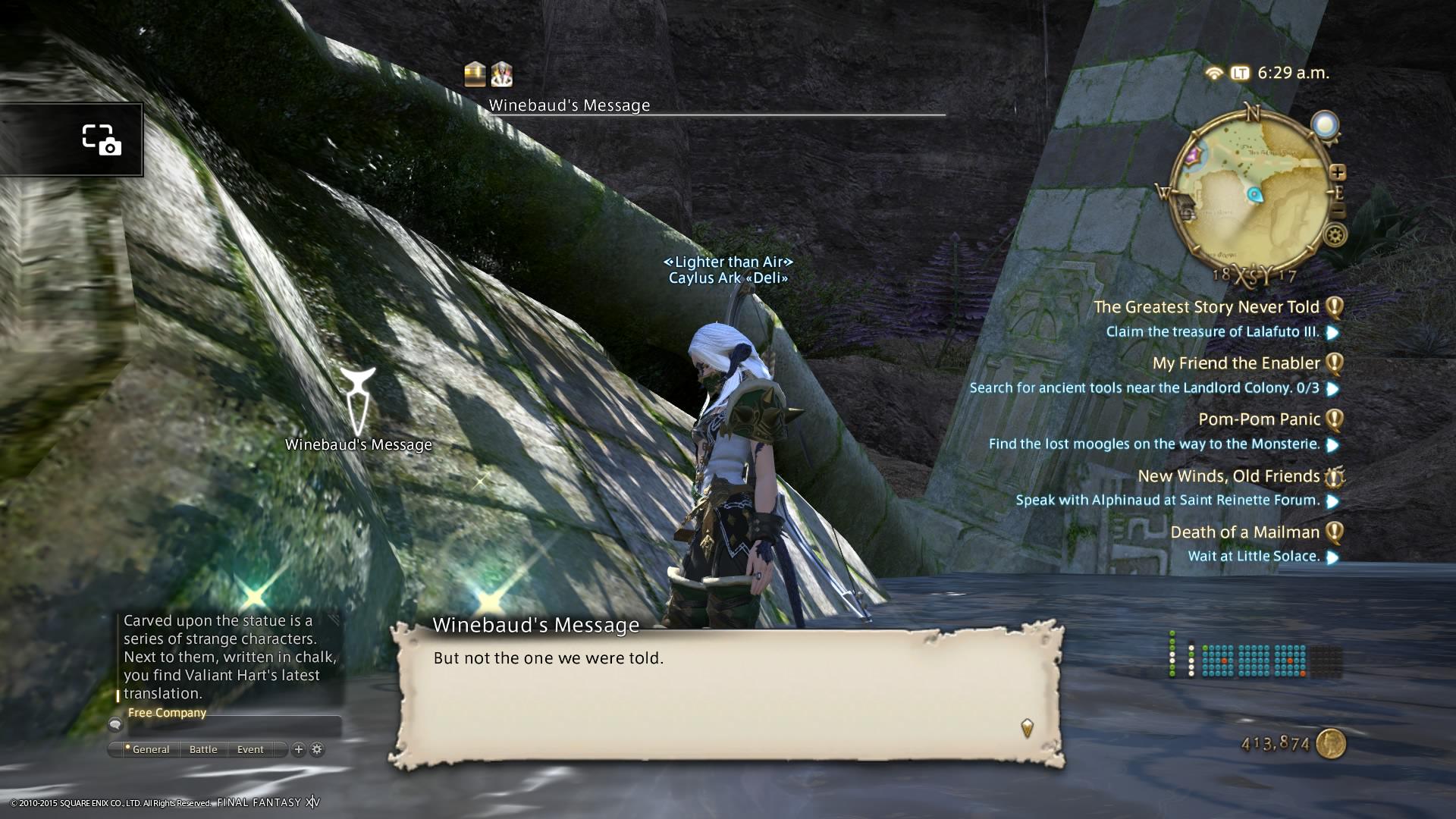 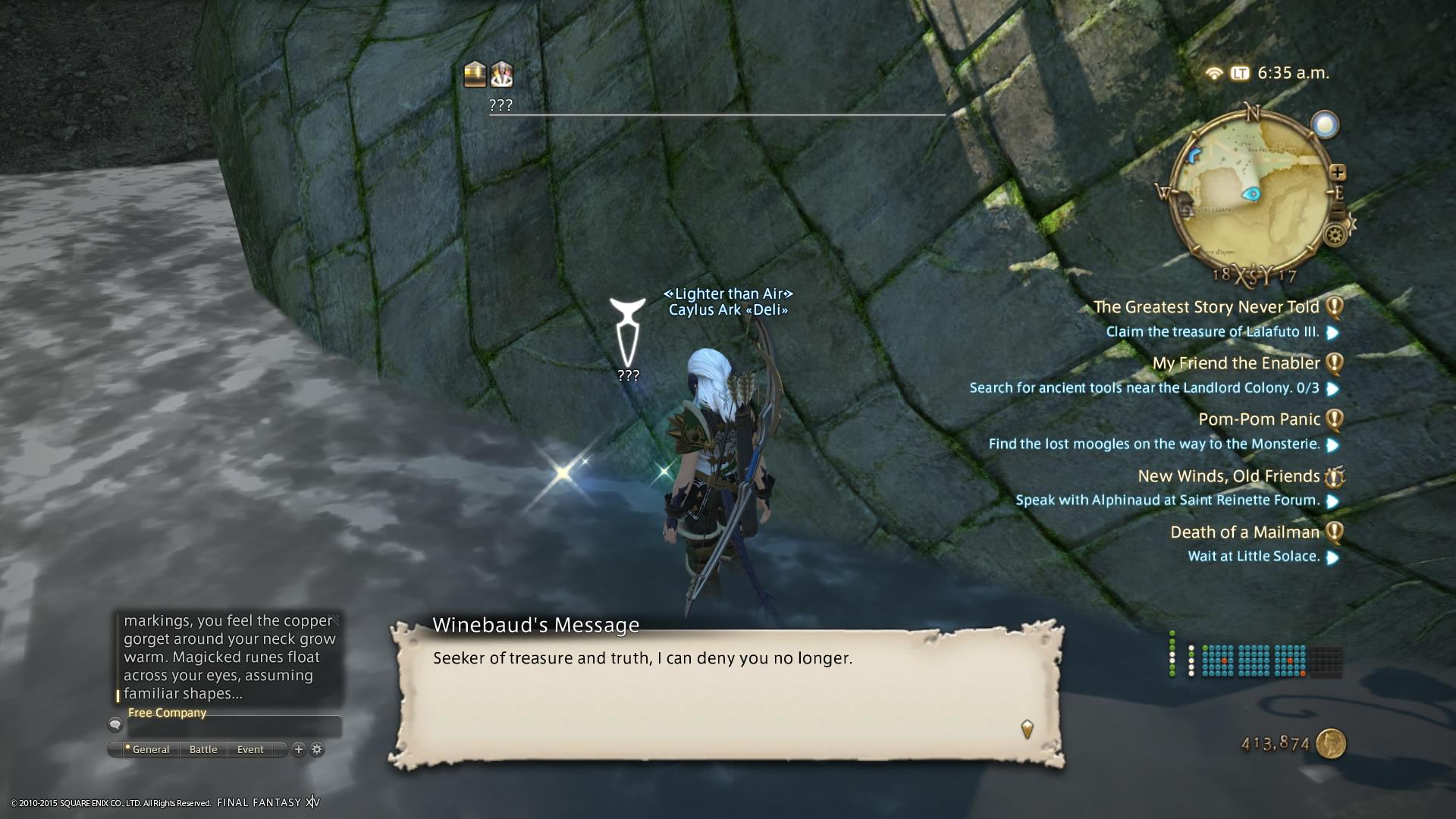 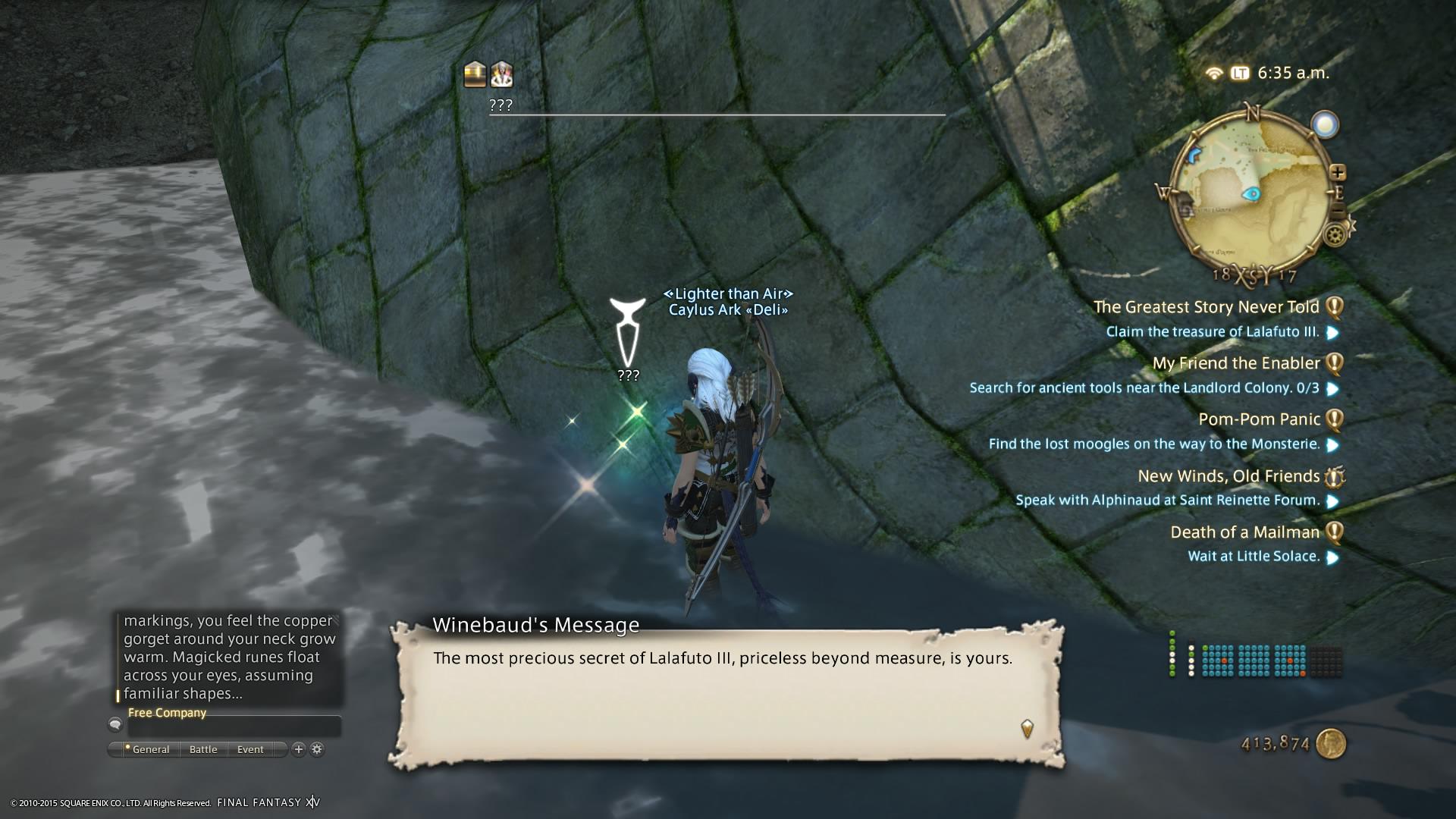 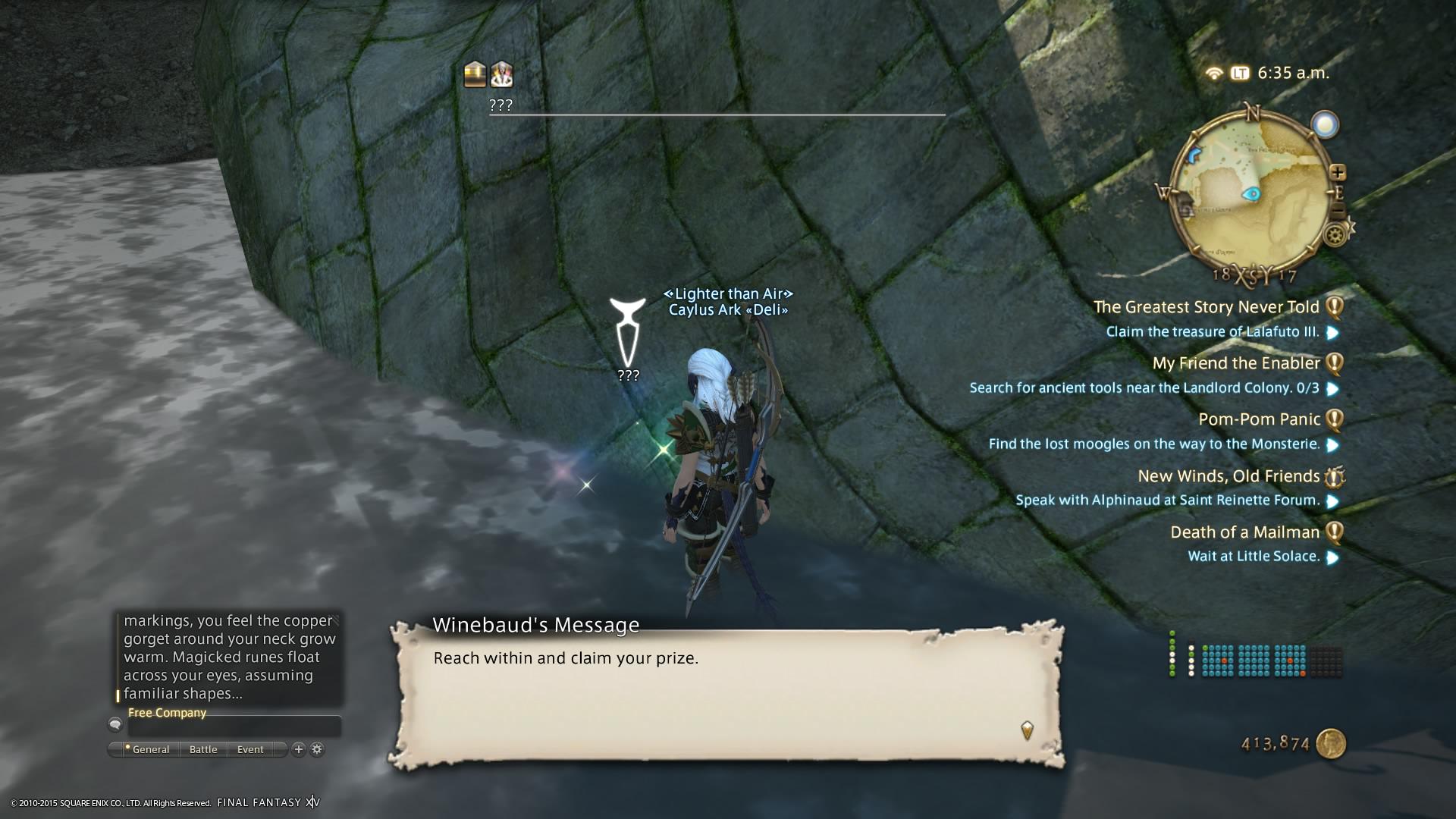 the eye is that of the great dragon, Nidhogg 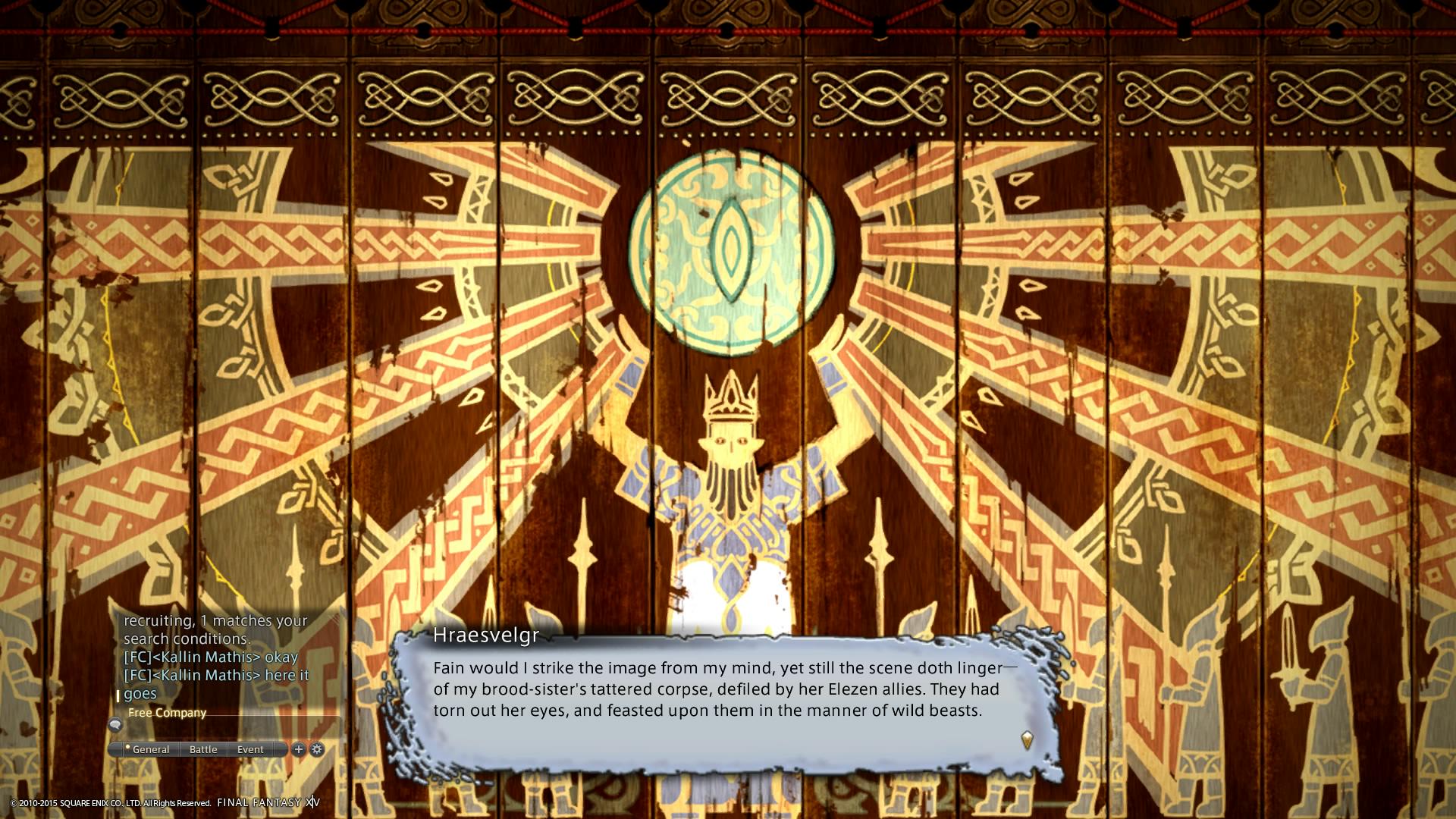 it is referred to also in another way during an interesting questline where you learn the lore of the surrounding ruins of Sharlayan by the living broomstick servants of an infamous witch. These questlines are among those with no help from the journal – you must solve the quests using only your mind and your gut 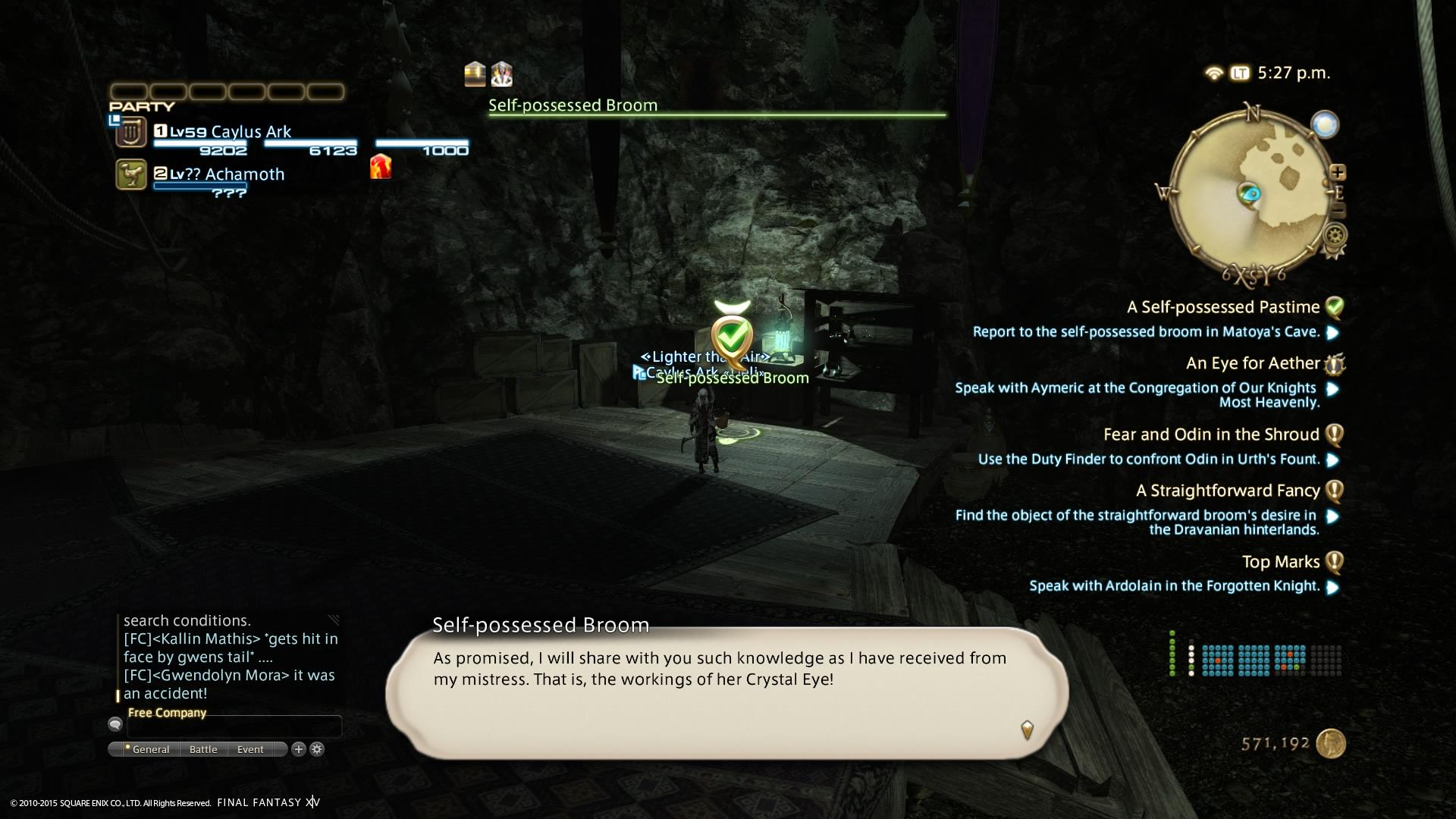 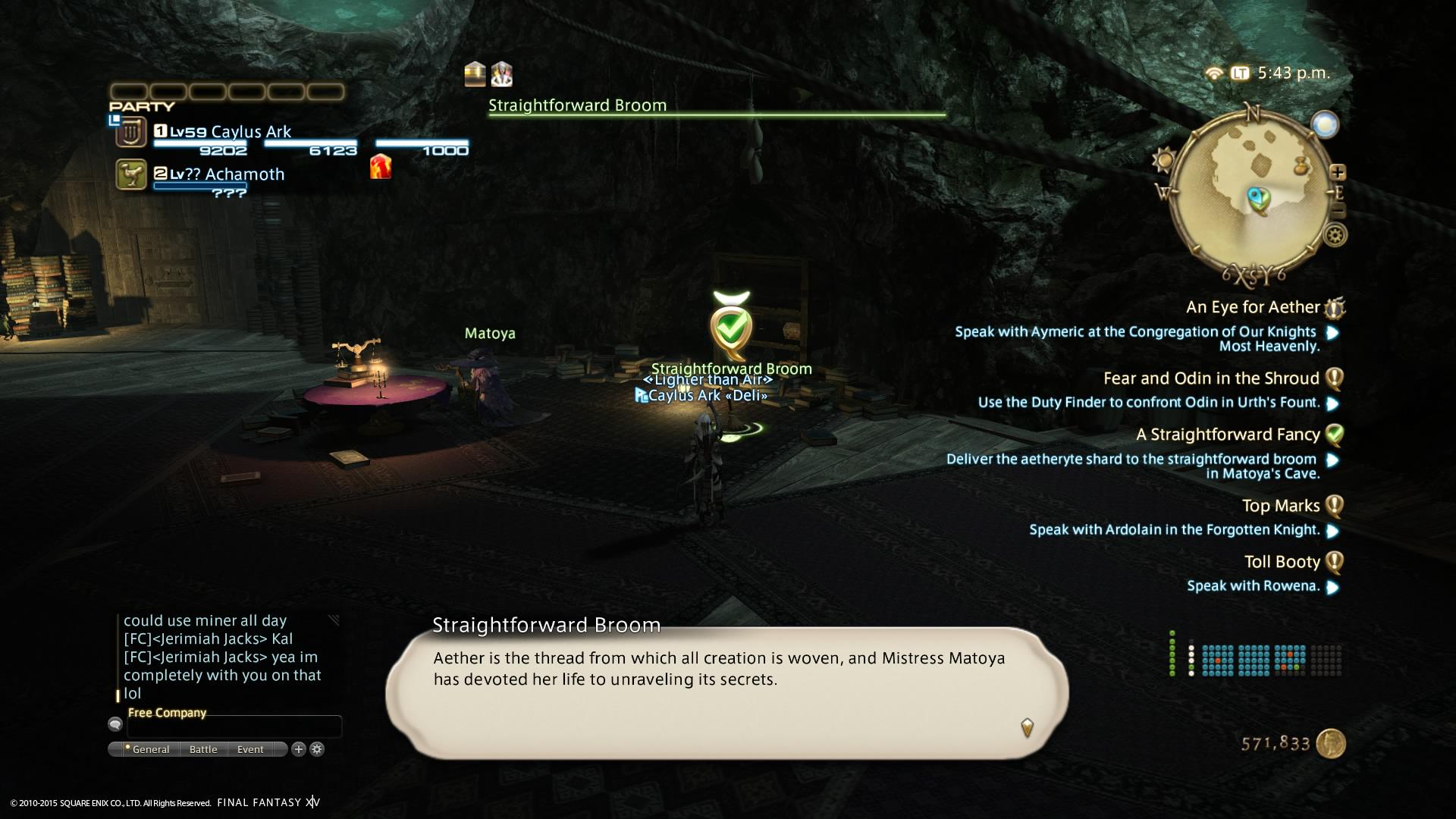 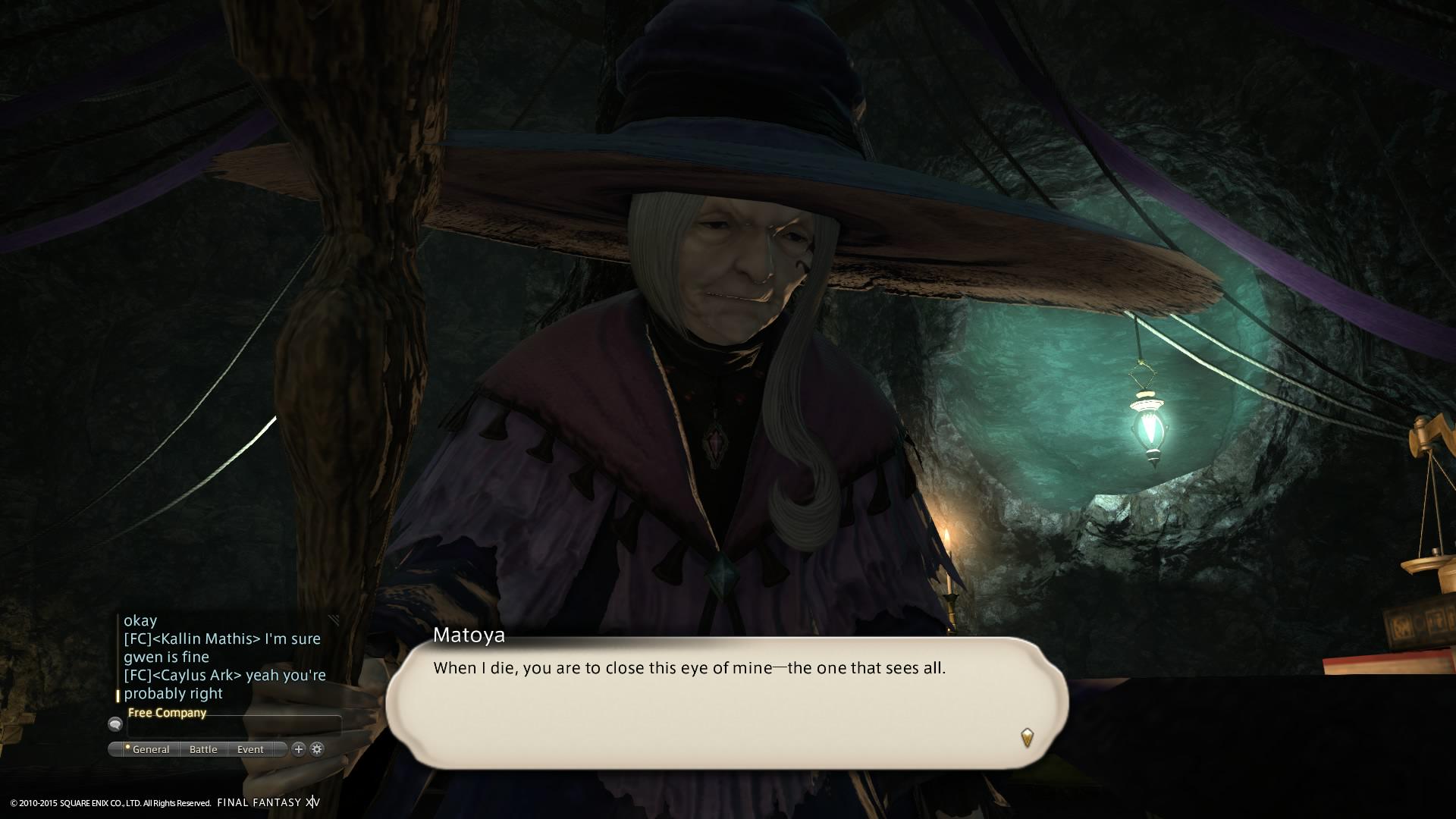 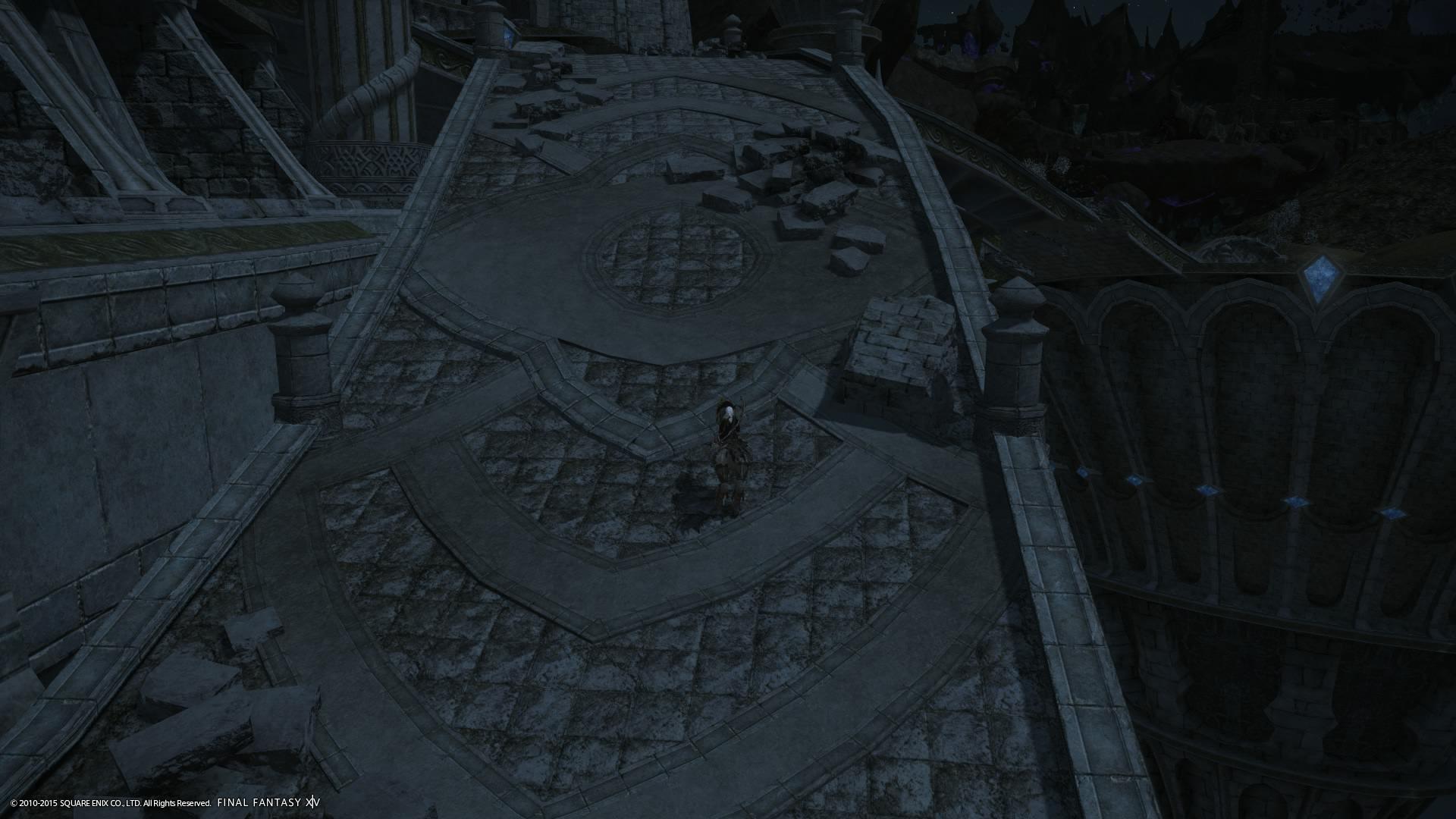 Alberic: You grow even stronger, and I speak of more than just the flesh. Aye, you are slowly but surely realizing your potential as an Azure Dragoon. It is heartening to look upon… though I must confess that my presiding feeling is one of relief. You must understand, the mere thought that the Eye would choose an outsider-one who ill comprehends the threat posed by the dragons-filled me with the gravest of misgivings. Yet you have… Ah, but I shall say no more, lest flattery impede your improvement!
Alberic: Now, during our last lesson, I enlightened you regarding the origins of dragoons. You will recall how Haldrath heroically triumphed over the great wyrm Nidhogg, and Ishgard came into the possession of the Eye.

Alberic: Tell me, <Name>-do you believe that these events truly transpired? Or are you inclined to think them faerie tales? I ask you because few folk have seen dragons in the flesh besides we Ishgardians, and most would soon dismiss them as products of the imagination.

Alberic: Alas, dragons are no less real than you and I, with Nidhogg perhaps the most real of all. In the course of its history, Ishgard has suffered under the creature on eight separate occasions. Each time the great wyrm rouses, the blood of countless Ishgardians is spilled.

Alberic: Let us revisit the past once more, <Name>. The time is fifteen summers past, and the place Dravania.

Alberic: After a century of slumber, Nidhogg awakened once more to resume his reign of terror. Entire villages were razed to the ground, their inhabitants reduced to ash.

Alberic: Sensing the great wyrm’s unbridled rage others of his kind began to rouse, and in such numbers as to blot out the sun with their wings. A deep, foreboding darkness swept over Ishgard.

Alberic: Raging infernos painting the belly of the sky an angry red… The agonized screams of innocents fading into deathly silence… In my station as the Azure Dragoon, I was there through in all-bore witness to all of the horrors.

Alberic: But there was no time to offer even a silent prayer. Nidhogg lingered in one place only long enough to lay it to waste, and when he took wing, so too did I pursue him, a man possessed. This game of cat and mouse continued for what seemed an eternity before i was able to force a confrontation upon the great wyrm.

Alberic: The battle unfolded in a tiny settlement on the edge of Coerthas, raging on for three days and three nights with neither side able to gain a decisive advantage. Remaining on my feet by sheer force of will, I realized that it must end now else it shouldn’t end well. So, marshalling my last onze of strength, I wagered all on a single thrust.

Alberic: My lance struck home, burying deep in the ruin of my opponent’s empty eye socket. Yet before I could withdraw my weapon the wyrm lashed out wildly in its agony, dealing a blow that left me sprawled upon the scorched earth, nigh insensate.

Alberic: While I did not perish from my injuries, they rendered my body unfit to bear the power of the dragon, and I was an Azure Dragoon no more. Lying bedridden, my thoughts wandered to all the innocent that had been lost-the people I had failed to protect.

Alberic: Aye, you heard me right-all of Ishgard may suffer for his crime. Though we know little and less of the minds of dragons, it is conceivable that the disturbance surrounding his stolen eye will cause Nidhogg to awaken once more. That his kin have been stirring to life serves as fair warning of that.