Author’s Note: only weirdos who live in libraries will like reading this

If people notice the nested interpolation of patterns in the continuous process of being potentiated across the cosmos and cultures past and present, should he discount this startling ‘coincidence’ as ‘pareidolia’? Having learned, the perception of a conscious observer changes the configuration of light and decides among the positions of an electron, isn’t it easier to start with an observation, and build upon the consequences of this theory , before dismissing consciousness as non-testable entirely?

The fact of the matter is that consciousness is the underpinning of the material universe, and it is in fact testable. Princeton’s ‘Noosphere’ ran for many years as the ‘GCP’ dot. Strong consciousness in global or local configuration DOES actually alter what occurs physically. There is an iPhone app that you can test this with yourself, link here: “Biocentric Game measures your ability to change reality” .

The intervals / frequencies and amplitudes of electric oscillation are the substance of our senses (the picture of matter our eyes create in our minds) and our senses are orientated into discrete narrative events by the illusion of temporality, which is only possible by the disparity in frequency intervals as they hit the sensory organs.
Further then
Time is a function dependent upon the mental frame (think lens) of the consciousness that narrates its flow, because time is an illusion that mediates a narrative (which is experienced and therefore real).

Essentially the brain is a behavioral and mechanical object, but one which takes place in the context of an irrational , holographic and electric universe. It bound by the imposition of order so that meaning can organize the relationships between objects. its own transduction of the field where sensation occurs perverts the true form and nature of metaphysical reality but it is a necessary distortion, this is reflected imperfectly in Special Relativity, one of the consequences of which is the ‘subjective’ nature of time calculation. Einstein himself sensed the necronomicon lurking behind the curtain, but the scientists wouldn’t be ready to confront any model of reality that resembled the babbling of a certain ‘Mad Arab’ (Tesla excluded, whose work is well known to the people who run this show, as they took it and gave him nothing)
the interpolation of infinite patternicity is ever changing because in syncopation it engenders the two disparate poles of negative and positive spin – ie, contrast. Contrast/duality means that like a drill patternicity proceeds in carving out ever more precise orchestrations in what only appears to be a linear fashion ending in compression to nothingness. But even if one were to leave this perspective as is, their model could never become nothing because the density of the universe would become negative before it ever became 0 and a negative density is now just a looking glass  universe. 0 doesn’t go to 1, and 1 doesn’t go to 0. “what can never end has never begun, but can only stop ceasing to become“. I’ll make this less esoteric after the following shameless plug… 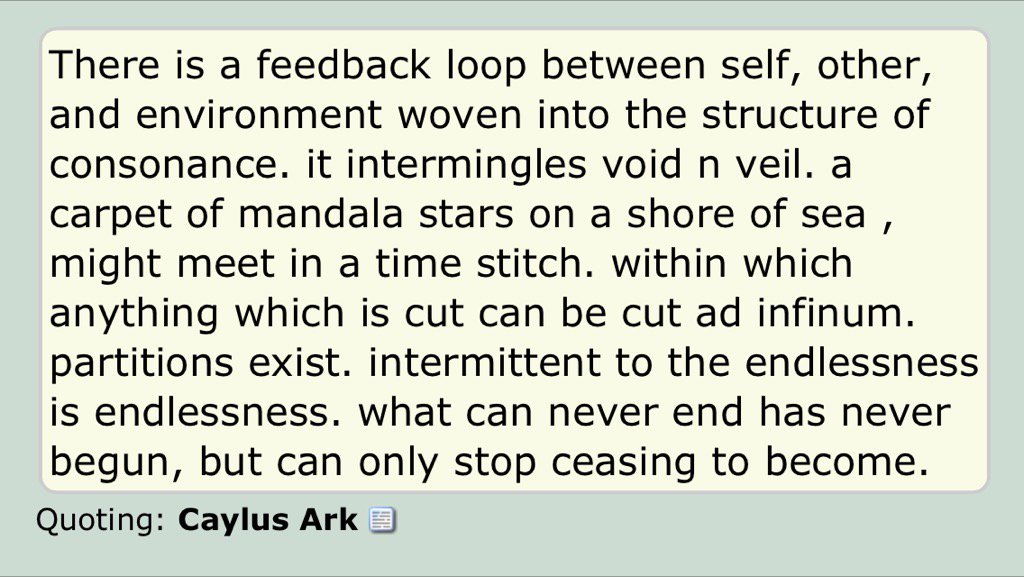 in truth the linear function we use to derive a terminus point for our universe is arbitrary with respect to the question of whether or not the universe will end.

For one thing, time is not a river, and there is no reason to assume that lives in historical succession are chronologically contingent at all. It may be hard to wrap a head around, but its possible for a change in the future to alter the past in such a way that it will now support this new reality even if it before supported the old one.

that end point is an arbitrary notion because it loses context without datekeepers. Can it be said to exist without a temporal narrative constraining it? I say no.  We hallucinate temporality as a function of neurological necessity (hence the usefulness of special relativity in almost every normal case a human may encounter)

In reality the fragmentation (IE irrational numbers, quantum uncertainty, black swans) of the whole and completed model is what ensures it will never be linear – sin(e) (the wave, the snake, the weave) is the chaos of the abyss that makes eternity not only possible but incontrovertible. Mankind is the wildcard of conscious experience.

No good story lacks imperfection. Every bad character has perfection. We learn nothing from battles where we dominate the opposition. We despise nothing more then what is given free. the source could not be whole because then it would be incomplete. only because it is fragmented is it infinite despite violating rationality. that is the spark of the creative and divine. To be less rhetorical: the nature of an infinite fractal is chaos. The invisible mathmatical background of a fractal govern the range of relationships which may appear in the formation of the fractal itself, but the fractal NEVER reaches maximum resolution.

TL;DR This world is like a crystal prizm , our consciousness is like the lazer that passes through it, our lives/experiences are the shadows on plato’s (new age rave) cave wall. Consciousness can be measured (look)